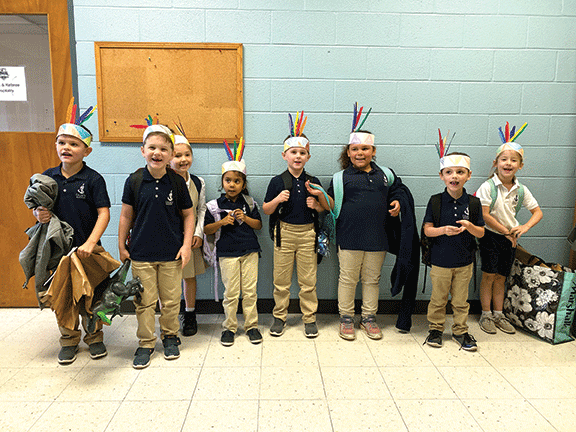 Kindergarten students are ready for the Thanksgiving feast! 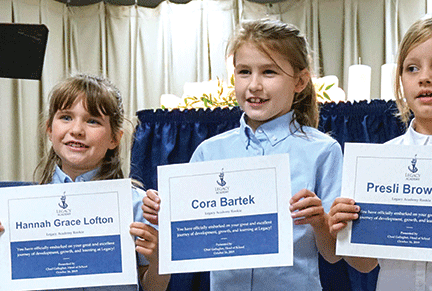 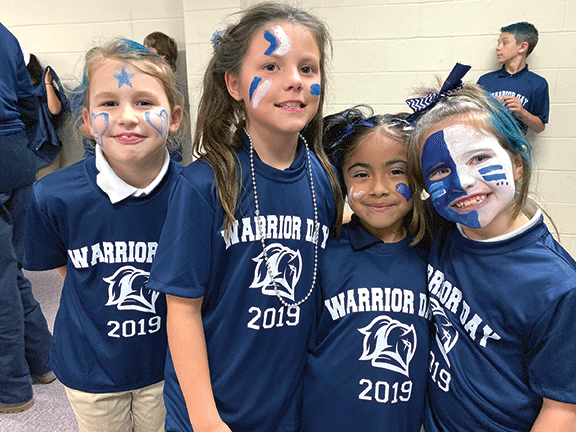 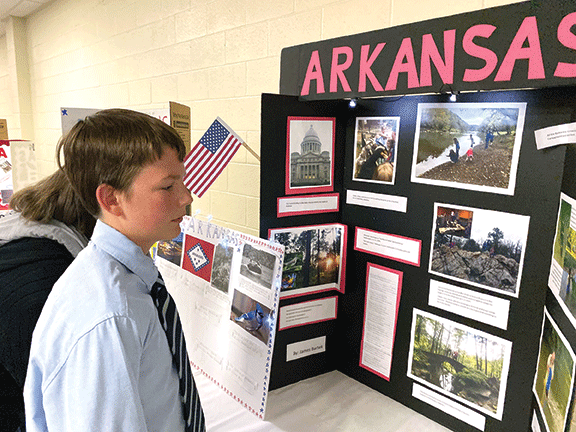 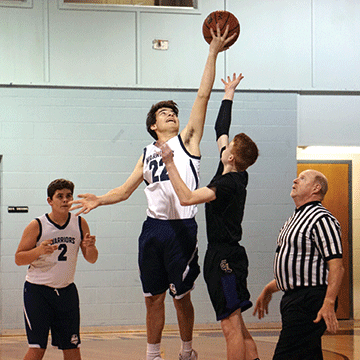 Three months after moving into the former Lockesburg Elementary School campus in Lockesburg late last summer, the personnel and students of Legacy Academy, a Christian Pre-K-12 school that first opened in De Queen 11 years ago, are beginning to settle in — some of them.

If you walk into school co-founder Chad Gallagher’s office, the floor is filled with picture frames that have yet to be hung.  For Gallagher, a local entrepreneur and business owner with a passion for Christian education, the adornments that will decorate his own office will be one of the last things he oversees as the academy completes its transition and expansion.

The school opened on Sept. 3, with the help of many volunteers who worked through the late summer moving furniture and playground equipment to the new campus. Almost halfway through the school’s 12th year, the first with a senior class, Gallagher is rightly proud of what he, his family, his staff, and the students have accomplished academically and with the opening of the far-reaching campus, which includes a library, art room, science lab, music room, and commercial kitchen. The campus also boasts an impressive gymnasium with a floor recently re-done by the same company that did the Arkansas Razorback’s home court.

“We’ve been tremendously blessed,” Gallagher said about the 35 acre campus. “We’re very thankful to have this facility, Its been a great upgrade for us — a real blessing.”

While it was only a 12 mile move east for Legacy Academy, it’s a major milestone in the school’s history. Gallagher said that the school didn’t lose any students from De Queen but by good fortune, found themselves in the center of five school districts: Ashdown, Nashville, De Queen, Lockesburg and Horatio. With Lockesburg having lost its local schools to consolidation, Legacy is now the only K-12 school in the area and is attracting many local students who before had to travel by bus to De Queen or Horatio. In the last year, the student population has increased from 60 to near 100 students with more applications on pending. The school has also, instantly, become the biggest employer in Lockesburg.

“We’re within 20 minutes or less of five area school districts around us,” he said. “This gives families another educational option.”

He said that he hoped for the success of all schools and students, noting that some students would thrive at Legacy Academy, founded on a faith-centered program, while others families may choose public school and others still, through home-schooling. Gallagher advocates the importance of school choice for families.

“It’s important for parents to have options and to have total freedom, without obstacles to educate their children however they believe to be best” he said. "We’re teaching students about the Christian faith and developing their character as well as providing academic rigor. Our students perform very well academically and we have a rigorous curriculum.”

He said that Legacy students were guided toward college and that he expects students to earn a good share of scholarships due to their testing scores and performance. Legacy’s seniors averaged a 28 on the ACT and high school students, grade 9-12, averaged a 24. Arkansas’ state average in 2018 was 19.4.

“I expect our students to be successful as they move on to college," he said. "I also expect that if they go to trade school or open their own business or enter the military, that they will be well developed young people who are able to think critically and excel in any environment."

Gallagher was highly appreciative of all the support the local neighborhood had provided the school. The Bank of Lockesburg donated a pair of scoreboards for the gymnasium and also helped provide funding for the new gym floor.

“One thing that has been most meaningful is how the people of Lockesburg have embraced us,” he said. “They’ve been very helpful and supportive.”

The boys JV is undefeated (9-0), the girls are running strong, 7-2 (they won only one game last year), and the senior boys are 5-3. An interesting point about the senior boys is that two former JV players were aged off the JV team, forcing Legacy to employ a senior squad heavily loaded with JV players.

Gallagher said that community support for the teams has extended to local residents filling the stands on game day, many who don’t even have students at the school.

It’s a big thing,” Gallagher said about the appeal of the teams.

The school also began to field a track team last year and this year will add tennis and golf teams. After that — a baseball team.

“Right now it’s all about developing the basketball program,” he said. “We’re in the midst of building a program, which is always a fun thing to do.”

That being said, Gallagher felt that the school, which for the first time has students in every class from kindergarten through 12th grade, had made a great breakthrough and that they had finally reached a place where they could take a look around and feel pride in what they had accomplished; from dream to inception, to owning a campus that has room to expand and continues to grow. He said that they were moving on from the school’s pioneering phase, where it was continually adding to the program, be it academics, sports or other areas of growth within the academy community.

The school has already enjoyed some big moments on the new campus in addition to basketball games. The new campus has hosted the school's annual Thanksgiving Grateful Gathering, socials after school for upper level students, and the first ever Scholar Ceremony, in which sophomore through senior students were presented with a blazer as they pledged to uphold the school’s values and standards in faith, character, community service and academics.

Gallagher, who runs his own consulting company serving nationally recognized public relation clients and other clients in public policy advocacy, as well as owning a farm, a restaurant, and real estate, said he seems to have found his real passion.

“The work I get to do with consulting clients is a tremendous honor, but serving in our church and giving our hearts and lives to establishing this school is the most meaningful thing I’ve ever been a part of," he said. "I love every moment of it and wouldn’t trade it for the world. We’re basically able to focus on strengthening the school now that it’s established, as opposed to trying to get everything done for the first time. It’s not about the next thing we have to add but about excelling in what we have. To start a school from scratch, thats a big feat, but it happened little by little. We’re grateful for God’s help and his kindness toward us.”