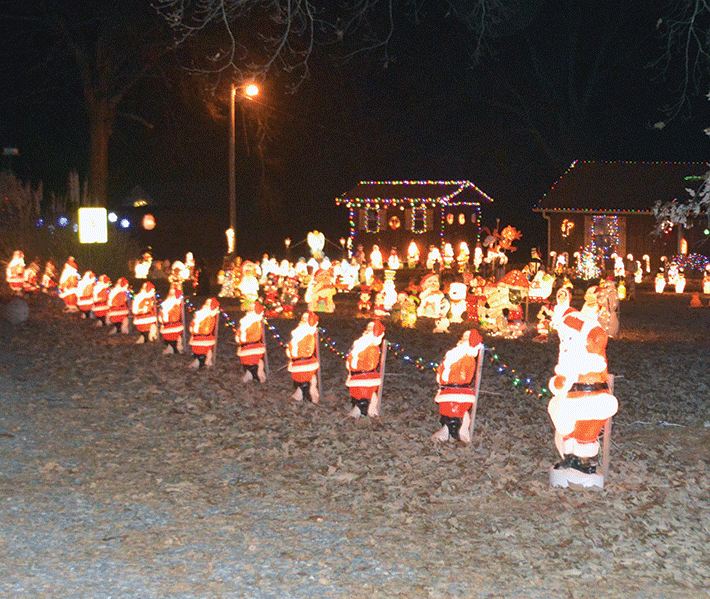 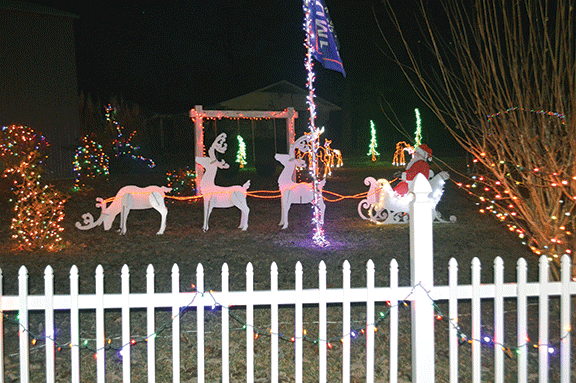 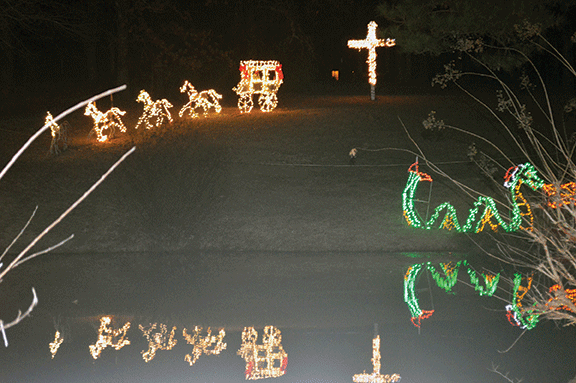 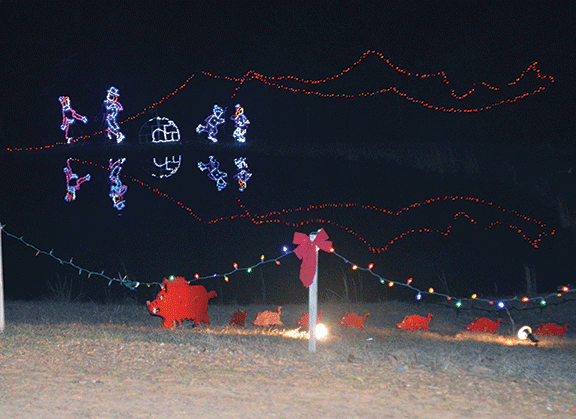 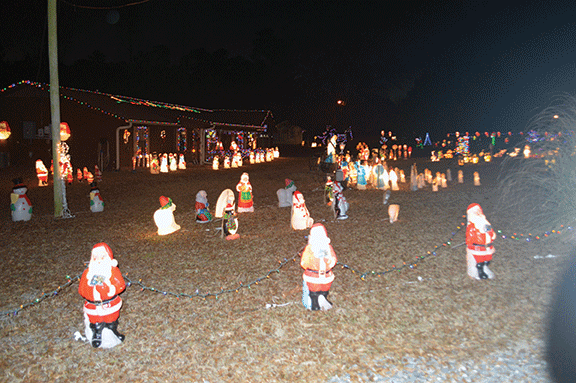 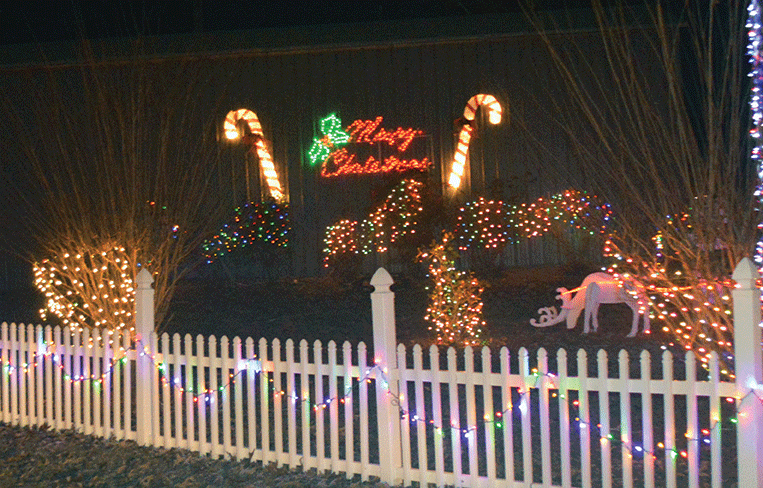 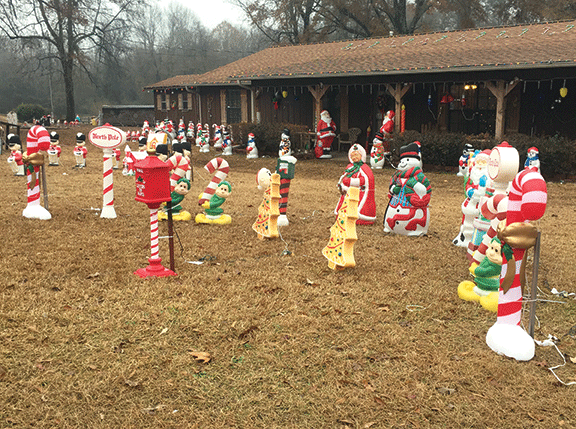 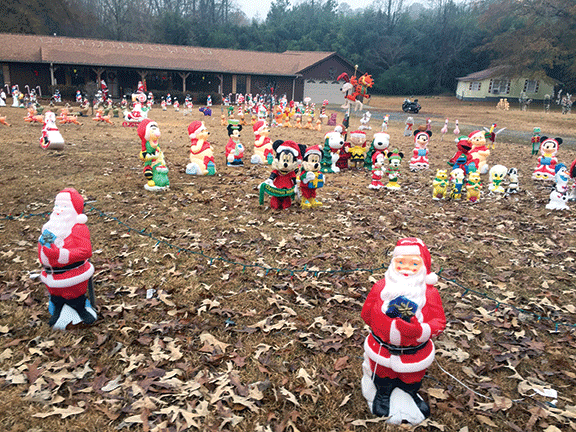 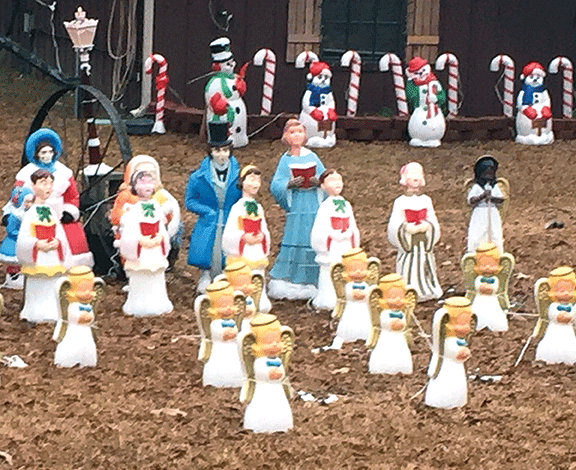 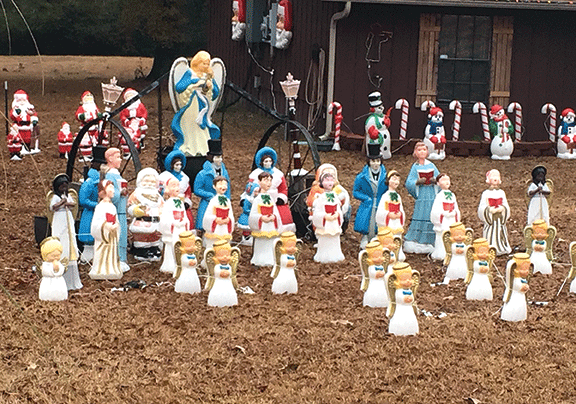 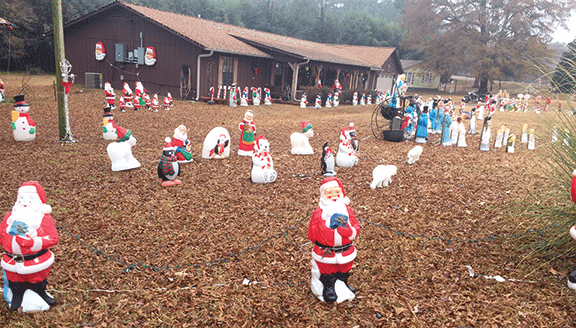 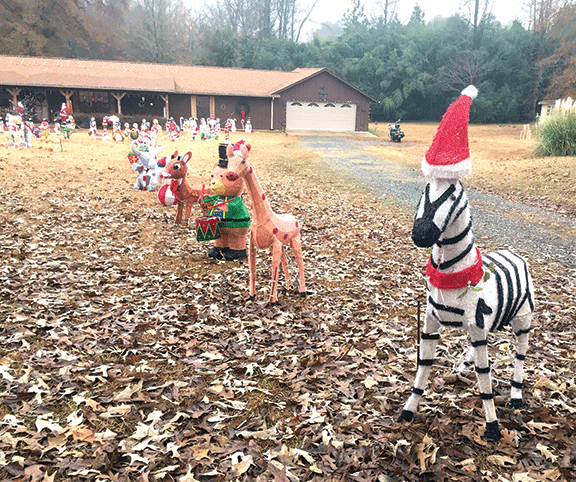 Most people love Christmas and the holiday season. It’s a time when families and friends gather together to celebrate and enjoy each other’s presence. It’s a time of excitement for young children, who spend weeks awaiting Santa’s arrival and the many toys and gifts he brings them. And it’s a time for families to decorate their homes with holiday lights and Christmas trees.

Arguably, no one in De Queen loves Christmas more than Thomas and Donna Sweeten, and no one decorates their home better than the two.

The couple’s celebration of the holiday, which began humbly some 25 years ago with a few small outdoor decorations, has grown to spread across the six acres of their property on Lace Lane off Ninth Street north of Collin Raye.

“We just love Christmas,” Thomas said. explaining the reason for the ever-growing expansion of holiday ornaments across his yard and that of his mother-in-law, Ernestine Watson. “It started with just a little bit of stuff and every time we find something, we add it to our Christmas collection. It’s been pretty big for about 12 years.”

The perimeter of the yard is lined with lit up Santas while the inside is filled with glowing toy soldiers, Disney characters and nativity scenes. There are zebras and giraffes, reindeer and candy canes, toy drummers, penguins, snowmen and women.

There’s a choir and angels, Charlie Brown and Snoopy, football, soccer and basketball players, and a NASCAR exhibit. Elfs, dinosaurs, plastic and wire Christmas trees, a helicopter and an airplane. It’s a scenic expanse in the daytime, a winter wonderland of lights, ponds and Christmas excitement at night.

A small dirt road cuts through the property, with the many visiting cars having to pull over to let other vehicles pass on their way in and out. The neighbors don’t mind and one, Tracy Stancil, grades the road so that people can turn around at the end. Other nearby neighbors are decorating their homes as well.

“We just both like Christmas and hearing little kids driving by being excited about seeing Mickey Mouse or Rudolph, Thomas said. “It makes you feel good.”

The Sweetens’ both work for the school district, Thomas is a science teacher at the high school and also the coach of the state champion De Queen High School quiz bowl team. Donna works in the elementary school lunchroom.

They begin their second job of setting up the decorations beginning the day after Halloween with the goal of having it finished by Thanksgiving. Thomas and Donna work on the south side of Lace Lane while their mother-in-law takes responsibility for the north end.

For the last five years, the school district’s National Honor Society students have been coming out and helping, collecting volunteer hours for their efforts. They’re also treated to pizza, cookies, hot chocolate and donuts, and this year they were able to complete the job over the course of two Saturdays and a Monday.

“We got the best kids,” Thomas said. “Not just in the country, in the state.”

Setting up the decorations is just part of the job. Light bulbs have to be changed at an almost daily clip the entire holiday season. While one would think that the impact on the Sweetens’ electric bill would be phenomenal, Thomas said it was only about $100 higher than their other monthly electric bills.

“It’s not a huge difference and you’re making a lot of kids happy for a little bit of money,” he said.

Thomas estimated that 20 to 30 cars travel down the road during the day and night, but when Santa is in the yard, it’s bumper to bumper. This year Santa will attend the Lace Lane Festival of Lights, which will be held on the property, Dec.. 20-21 between 6-8 p.m. Children can meet with Santa and have their picture taken with him. There will also be gifts for the kids and candy canes for everyone.

“He’ll have two wagons full of toys so the kids can pick out a toy and then we give them candy canes,” Thomas said. “I would love for everyone to come those days when we have Santa Claus. I would like to completely give away all the toys.”

Thomas estimated there are over 100 plastic Santa molds in the yard and maybe 13 nativity scenes, though he’s never took a count of the many decorations.

“We try to add something new every year,” he said, noting that the blow mold decorations that fill the yards are getting harder to find. “This year is the first year we haven’t added much — just some more Mickey Mouse, nothing major.”

The decorations will be on display until Jan. 1, but while it’s easier taking them down than putting them up,  they don’t come down as quick as they go up, sometimes due to the weather.

“Putting them up I don’t mind freezing to death,” he said. “Not taking them down.”

He said that the decorations are stored in a former rental house and two sheds on the property.

“It hard to believe how much room they take,” he said.

Thomas said that the one thing they don’t do is the blowups, which he said don’t last long, but when they find a deal on decorations or toys, they buy them up, sometimes in bulk.

“People probably think I’m crazy,” he said, noting that he’s at times purchased 400 Beanie Babies and as many as 300 Hot Wheel cars.

What states can learn from Navajo Nation's case rebound

Woman who lost dad to Covid-19: My father was robbed of life

Doctor on dealing with both pandemic and rise in gun violence

Doctor on dealing with both pandemic and rise in gun violence