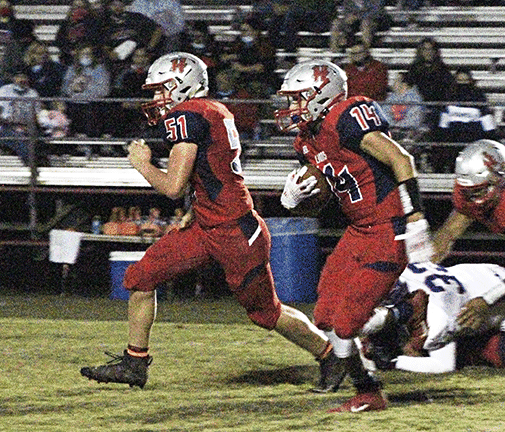 Manuel Hernandez of Horatio carries the ball into the Centerpoint defense. 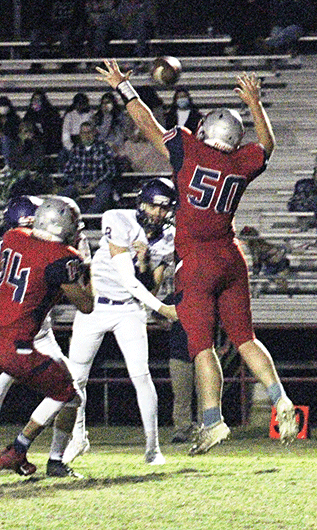 Horatio’s Connor Barron leaps in an attempt to block a Centerpoint pass.

Visiting Centerpoint downed Horatio 44-13 in the conference opener for both teams Oct. 2.

Centerpoint’s Josh Lawson threw three TD passes, two to Kaden Owens. Houston Way scored twice on the ground. Lawson threw to Owens for a 30 yard score less than two minutes into the game, the first of five first half touchdowns for the visitors who led 37-0 at intermission.

Horatio’s first points came at the end of a 53 yard drive in the third quarter. After a CHS punt the Lions took possession at their 47. Dylan Harrison gained three yards on a run to the right side.

Carson McKiever then scrambled for a first down at the CHS 42. On second and 10, Manuel Hernandez ran left for 12 yards and a first at the 30. A McKiever keeper gained another first down. A personal foul on the play put the ball at the Centerpoint seven.

After no gain on first down, McKiever threw to Luke Bright on the left for a touchdown with 3:33 left in the third period. Hernandez kicked the PAT to make it 37-7.

Jace Clark scored on an 11 yard run for the visitors with four minutes to play.

Horatio’s second TD came on the final play of the game when McKiever completed his second consecutive pass to Jacen Hankins.

For J.J. Watt, goal — however unlikely — remains the same: ‘Bring a championship to the city of Houston’