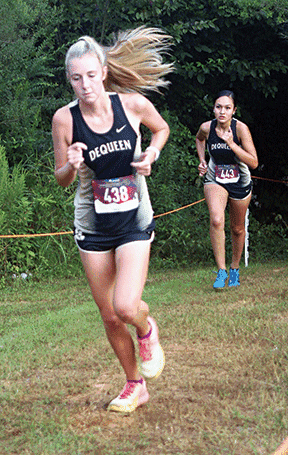 Abigail Barker and Marlin Perez climb the hill out of the woods near the halfway point of the Trinity course. 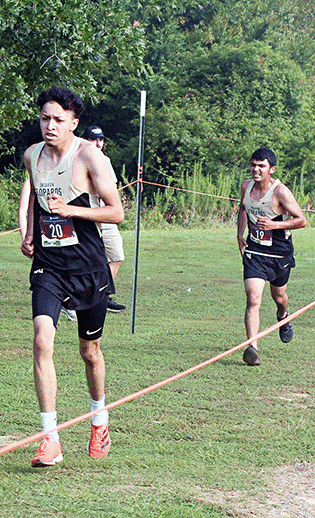 Manuel Alvarez and Carlos Aguilar near the end of the first lap. 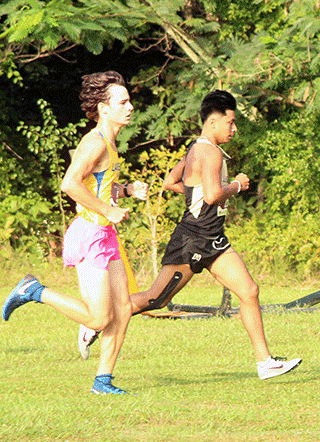 In the early stages Leopard Johnny Sanchez runs stride for stride with a Ram from Lakeside. 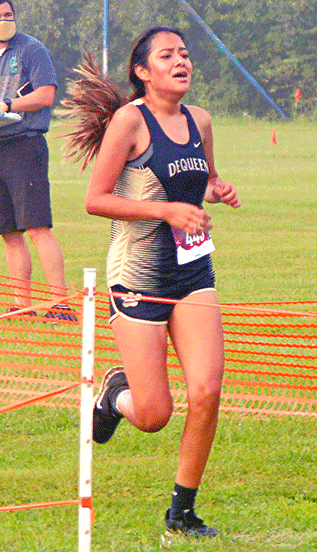 TEXARKANA — The cross country Leopards opened their season Sept. 12 at Trinity High School in Texarkana on a familiar course, but with some new opponents. With covid panic causing meets to be canceled, teams are eager to run whenever, wherever possible. The Trinity gathering drew teams from three states, including some that traveled three hours for the 8 a.m. start.

Class 6A Hot Springs Lakeside won both boys and girls senior high meets. De Queen was second in both divisions.

The Trinity meet was the first of the season in a year with multiple changes. The main reason of course is fear of the Covid 19 virus. Cross country meets will, as a general rule, be smaller. There will be a limited number of teams in a meet with a limited number of runners per team.

Previously there was no limit on the number of runners per team at Trinity. This time the maximum number was 10. “A lot of kids around the 10, 11, 12 area won’t get to compete as much,” said head De Queen coach Dennis Chaney.

For several years the cross country Leopards have faced fast competition early in the season by racing at the Hopkins County Invitational in Sulphur Springs, Tex. The governing body for athletics in Texas has limited meets to eight teams. De Queen was not one of the first eight to apply.

The Leopard schedule has several other changes as well. A date conflict resulted in dropping the meet in Wister, Okla. For the first time since De Queen has had a conference meet, it will not be run on the Ouachita Baptist University course. “The other schools didn’t want it there. That’s fine with me,” Chaney said.

The conference meet will be one of three meets at Mena, which had never been the site of a meet until Rich Mountain College got into the sport two years ago and converted an old golf course to another use. “I kind of like it that it has hills on it. It helps get ready for Oaklawn (site of the state meet),” Chaney observed.

The number of running Leopards may not be at quite the normal astronomical level. “We don’t have as many boys as usual, but we have more junior high boys than last year,” the coach said.

The De Queen boys team was state runner up last year, but was hit hard by graduation. Three of the first five Leopards at the state meet were seniors: Miguel Diaz, Anthony Sanchez and Jampiere Flores.

Johnny Sanchez, fourth overall at state, is back along with sophomores Carlos Aguilar and Gustavo Garcia who were De Queen’s sixth and seventh runners at state. “We’ve got some kids out that didn’t run last year,” Chaney pointed out.

Galvan was the leading Lady Leopard for three years. “The girls don’t have anybody who is going to separate from the crowd like Heidy did, but they should finish in a pretty close group,” the coach said. “We have five or six very competitive girls.”

All things considered, the coach is cautiously optimistic. “We’re not in great shape, but we’ve got everybody out that I was expecting,” Chaney said. “With the core group we have, we are going to be competitive.

“A very few have surprised me with their improvement. We’re behind as a team but in decent shape for what we’ve had to deal with.”

The addition came at a propitious moment. “It’s making it better,” Chaney said. “With all the things we’ve had to deal with because of covid, it’s made it easier.”

Pac-12 primer: Examining the factors that led to the league’s decision to play ball