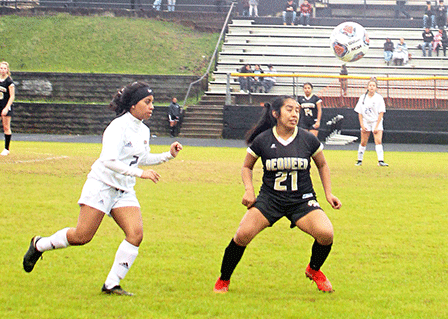 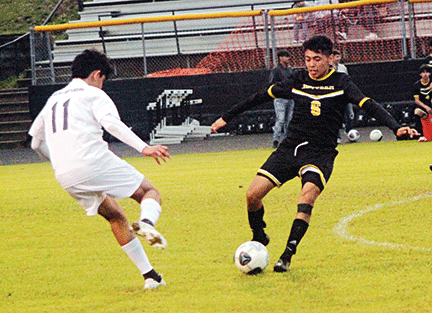 Leopard Gustavo Zamora moves the ball past a Heavener defender. 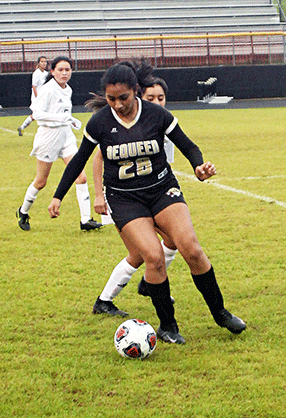 Perla Zapata of De Queen keeps the ball away from Heavner.

Both De Queen soccer teams won in the first home matches of the season.

The Leopards defeated Heavener 3-1 with two second half goals.

De Queen took the lead six seconds past the midway point of the first half when Jonathan Perez scored on a 15 foot shot.

The first half ended with the score at 1-0, thanks to a leaping one hand deflection of an on-target Heavener shot by Juan Cervantes with 10:26 left

The score went to 2-0 when a deflection by the HHS goalie was sent into the net by Stevie Rodriguez 12 minutes into the second half.

The third Leopard goal came from Ezequiel Gonzalez with 21 minutes left in the game.

The Wolves avoided being shut out when they scored on a shot that bounced off the cross bar with 12:40 to play.

In the girls contest the young Heavener team was greatly over matched and lost 9-0.

Wendy Victoriano lofted a shot into the HHS net only 75 seconds into the game.

Sara Victoriano score on a shot from 10 yards outside the box to make it 3-0 with 32:57 still left in the first half.

A hand ball call gave the Lady Leopards a free kick from 15 yards outside the box. Matilda Jacobo drive it home with 24:24 remaining in the half for the fourth goal.

Kenya Martinez scored the fifth goal on a 20 yard shot from the right side with 22 minutes in the half.

Sara Victoriano got her second goal when she rolled the ball into the net from just outside penalty shot distance.

Wendy Victoriano scored again on a short kick with 16:29 yet remaining before the half.

The first half clock was down to 9:31 before Yasmelin Gonzalez scored from five yards outside the box to make it 8-0.

With all the De Queen reserves getting into the game, the score was unchanged until 7:02 remained in the game when Jamielete Flores connected on a free kick from five yards outside the box.

Fear, panic as women navigate pregnancy during a pandemic

Fear, panic as women navigate pregnancy during a pandemic