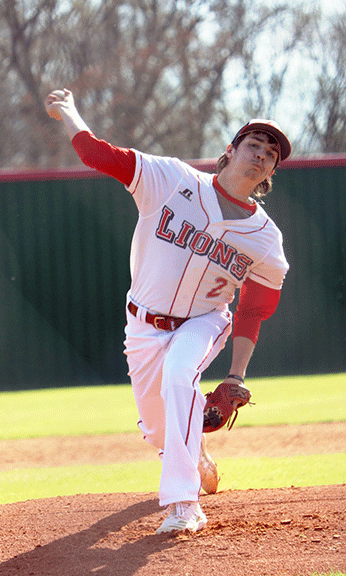 Horatio’s Easton Leonard pitches in the game with De Queen. 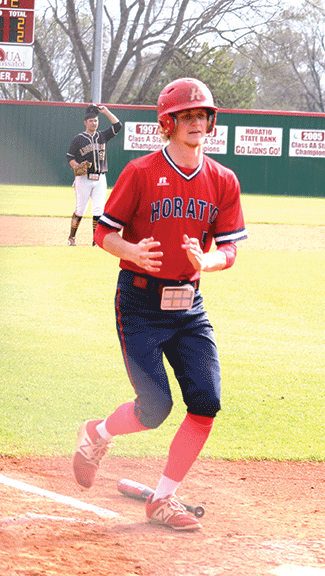 Wyatt Marshall of Horatio crosses the plate after his home run against De Queen. 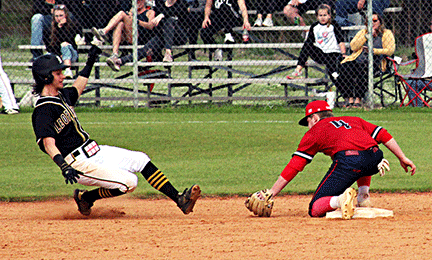 Horatio’s Easton Leonard pitches in the game with De Queen.

The annual Dugan Ward Memorial baseball tournament began March 12 with games played at Horatio and Ashdown. Wet weather and a health scare ended the tournament after the first day.

In games that were played before the cancellation, Wyatt Marshall’s solo home run in the fifth inning broke a tie and gave Horatio a 3-2 win over De Queen at HHS.

The Lions scored first when Tucker Emerson’s single drove in Orey Chander in the bottom of the first.

De Queen tied the score in the third. Dale Barnett was hit by a pitch then advanced to second on a wild pitch. Barnett scored when Isaiah Williamson was safe on Tucker Emerson’s error.

Horatio regained the lead in the bottom of the inning. A sacrifice fly by Blake Pickett brought in Chandler from third.

The Leopards tied it again in the fourth. Xander Worthey singled to drive in Joseph Allen to make it a 2-2 game.

Things did not go the Lions’ way in their second game. Horatio fell to Fouke 12-3 in the nightcap.

The visitors had nine hits to the Lions’ four, but committed only one error while Horatio had seven.

Lane Moya singled and drove in two runs for the Lions. Easton Leonard had a double and Wyatt Marshall a single.

Get to know the Wisconsin Badgers' 2020 basketball scholarship recruits

With economic concerns growing, Moos ramps up consideration of alcohol at Memorial Stadium

Cuomo says possible NY quarantine 'would be chaos and mayhem'

Cuomo says possible NY quarantine 'would be chaos and mayhem'