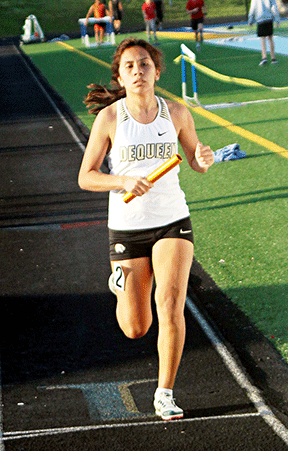 Heidy Galvan crosses the finish line of the girls 4 X 800 relay at Lakeside’s Ram Relays to win the first running event of the year for the De Queen girls in what turned out to be the only outdoor meet of the year. 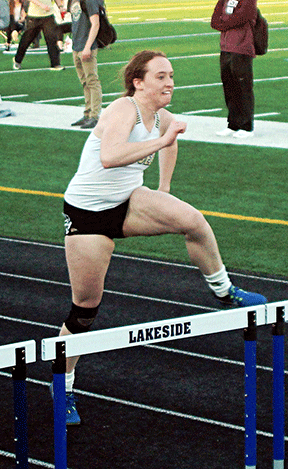 Lady Leopard Josie Burke clears a barrier on her way to a win in the 100 meter high hurdles in De Queen’s only meet of the 2020 season March 5 at Lakeside. 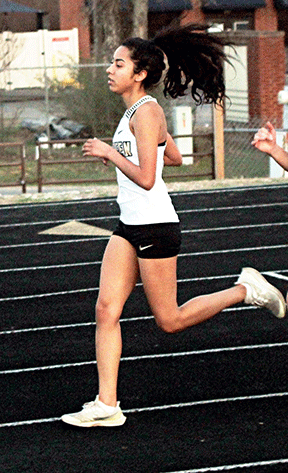 Xochitl Flores of De Queen moves down the back stretch of the 1600 meter run at Lakeside on March 5. The track season was suspended before the next meet.

“It was so quick. We just got into it, then it was over,” said De Queen senior girls track coach Lanny Allen of the lost 2020 season.

The Leopard track teams were headed for Prescott for their second meet Thursday, March 12 when they turned around and returned home. “That Friday we were in school and worked out. Saturday or early Sunday they announced the first closing,” Allen said. “I figured we were going to be out the rest of the year, just looking at what other states were doing. Oklahoma was one of the first states to close its schools for the remainder of the year.”

Indications were that the Lady Leopards would have had a good year. “I had high expectations, just seeing the improvement over a couple of weeks of practice. We had a group that was improving on a daily basis.

“They did things they weren’t normally asked to do. They didn’t complain, just stepped up and led. The thing that impressed me the most was the work ethic. I hate it that the season was cut short; I wanted to see them reach their potential,” Allen said.

In fact, three of the seniors will continue to compete. “Josie is going to SAU. Heidy and Xochitl are going to run cross country at Henderson,” noted the coach.

As much as he hates missing the season, Allen is trying to focus on a bigger picture. “The important thing to realize is we’re trying to keep something from spreading. This is uncharted territory for schools, athletes,” he noted.

He is making a decided effort to practice the recommended social distancing. “It’s made me more aware of where I go, what I do. I try to stay home as much as I can. One of hardest things is not being able to visit my parents or my grandkids. I have a lot of phone conversations. I spend probably an hour a week on the phone with my dad. My mom’s the same way.”

Allen’s plans for the summer included a long cross country trip with his son, who is a senior at Malvern. “I haven’t seen my son. His mom and I decided not to let him travel while this is going on,” Allen said. Like just about everything else in life, the sightseeing jaunt is on hold until government officials decide the coronavirues threat is over.

There is one form of social distancing Allen enjoys. “I’ve probably fished more this spring than the last couple of years,” he said.

One of the changes planned for De Queen High School for the next school year is for Allen to form a fishing team. “I would like to have that information out to the kids, but I’m having to wait. We should have time to get the info out and have a parent’s meeting before the season starts.”

In addition to track, Allen is an assistant coach for senior girls basketball, which usually has a full summer of activities. That cannot happen until the Arkansas Activities Associations gives the go-ahead. No activities will be permitted until June 1 at the earliest.

“What I would like to see is when we get to May 31, the AAA lifts the dead period,” he said. “I’d like to get back to normal, if we can. If that will happen, I don’t know.

“People are unsure about how things are going to end up. You can only do what you can do. I’m just waiting to hear what they say next. We may never see anything like this again.”

Allen is ready to return to work. “I’ve talked to a lot of coaching friends. They’re all ready to get back. Everybody really misses teaching the kids,” he said.

“I’m just thankful my family is healthy. I really don’t know anybody that’s tested positive for it.”

Whether seasons can be saved is unclear, but worried UA season-ticket holders can save their seats