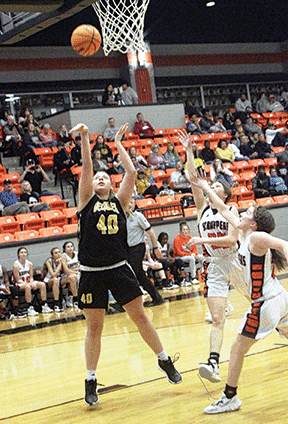 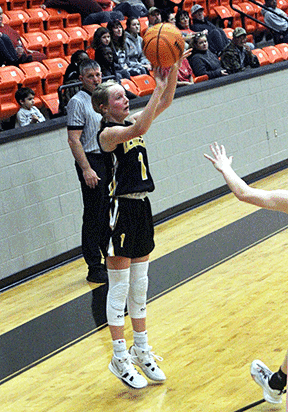 Landri Liggin hits a 3-pointer for the De Queen junior girls in the finals of the Nashville tournament.

Landri Liggin hits a 3-pointer for the De Queen junior girls in the finals of the Nashville tournament.

NASHVILLE —  The De Queen’s girls team was the runner-up in the Nashville junior high tournament Nov. 20. The home team took a 54-19 win in the final.

The pattern of the game was set early. De Queen struggled with Nashville’s full court pressure, and the Scrapperettes shot well. Nashville had eight 3-pointers in the game. Six different players hit a trey in the first half.

De Queen trailed by seven before scoring. The first quarter ended at 19-5. The visitors’ points came mostly inside when they could get the ball to Gwen Bradshaw. Nashville led 38-13 at the half and 54-16 at the end of the third.

Bradshaw scored 11 of De Queen’s 19 before leaving the game with an injury in the third quarter. Landri Liggin hit a pair of threes. Ellie Morphew added two points.

Jessie Lyle had three treys and 19 points for Nashville. Shalyn Lyle had a three and 10 points. C.C. Collins had nine points with a trey.

Bradshaw and Chambers each claimed five rebounds. Ellie Morphew, Liggin and Ponce each had three. Perry Nickerson and Lindsey had two each, Gilmore and Gallardo one each. Liggin made four assists, Gallardo one and Billingsley one.

De Queen built a big lead in the second quarter of the second tournament game and downed Springhill 38-16.

The first period closed with Springhill trailing by only 9-5, but when halftime arrived, the gap was 21-9. Each team added seven points in the third.

Liggin claimed nine rebounds; Bradshaw and Katelyn Ponce each had a half dozen.