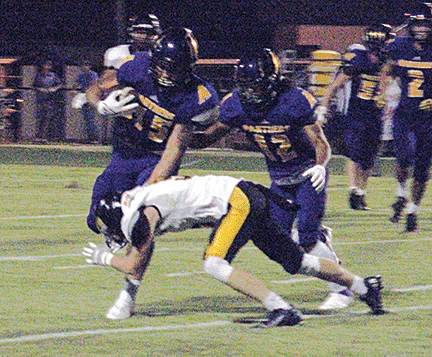 De Queen’s Monroe Barnett goes through a blocker to make a tackle at Ashdown. 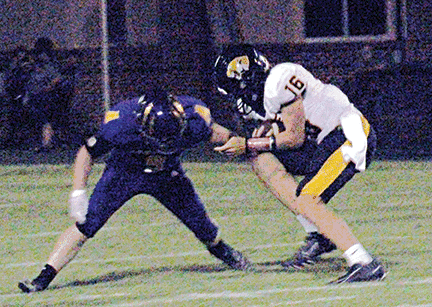 The Panthers got some help from Covid madness. The first athletic victim this year was quarterback Dylan Williamson who was quarantined. The Leopards had no offensive continuity from the first week.

After receiving the opening kickoff, Ashdown scored on a one yard run by Alex Keilbach a minute into the game.

The Leopards punted after three plays. The home team went up 14-0 after Jaxon Jester went in from the five to cap a 56 yard drive.

Then came the most unlikely play of the night. An extremely low line drive kickoff hit a Leopard and took a perfect bounce back to the kicker. The Panthers scored again when Keilbach passed to Jester for a four yard TD.

Leading 21-0 in the first minute of the second quarter, Ashdown executed a near perfect onside kick out of a huddle to get the ball once more.

De Queen got the ball for the second time in the game after Ashdown’s kickoff went out of bounds. On a third and one quarterback sneak, the whistle took a long time to blow. By the time it did, a Panther had the ball.

Starting at their 43 after an out of bounds kickoff, the Leopards gained their initial first down on back to back runs by Donyea Whitmore. They reached the AHS 37, but could not convert on fourth and one.

Ashdown added a final TD on a 20 yard run by  Xavier Sanders with 1:40 in the third quarter.

Beginning at their 26, the Leopards managed their longest drive of the game. A 10 yard run on a reverse by Jon Bahena gained a first at the DHS 40. On fourth and six Garrett Matthews scrambled for nine to the AHS 47.

Whitmore made De Queen’s biggest gain of the game with a 24 yard run to the AHS 22.

De Queen made a first at the Panther 12 when Monroe Barnett fought for seven on a bubble screen pass.

Whitmore gained two to the 10, but the drive ended when a reverse ended in a missed handoff turnover.

'That's what we needed': How did they survive NU scare? Sooners point to blocked extra point