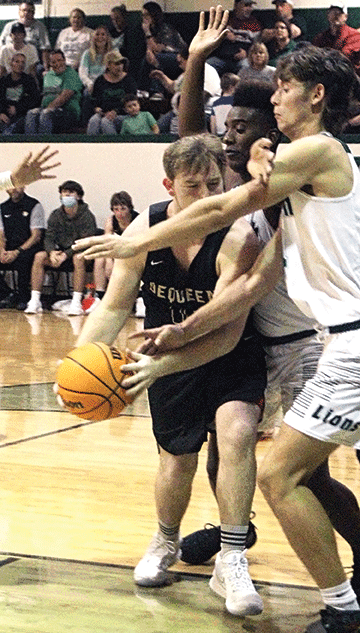 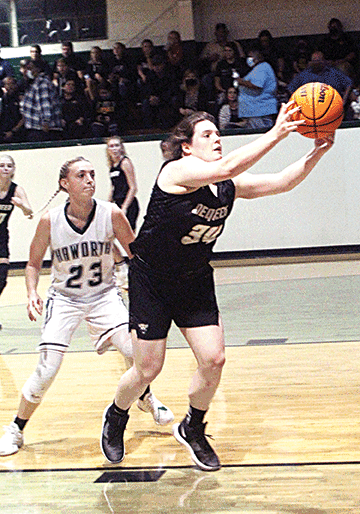 Madison Runnels makes a save for De Queen in front of T. Randolph of Haworth. 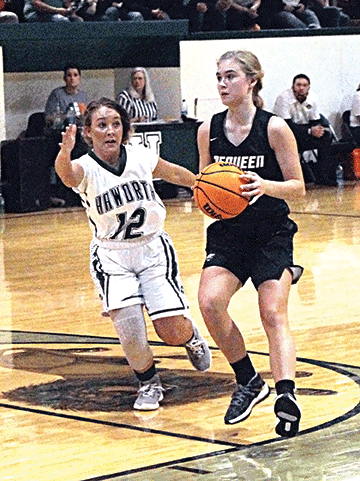 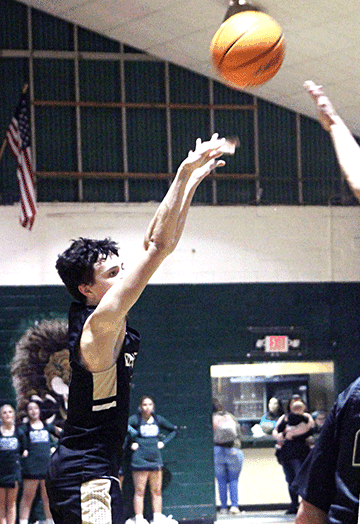 Will Dykes of De Queen hits a trey at Haworth.

HAWORTH, Okla. — De Queen’s basketball season began Nov. 10 with a pair of wins at Haworth, Okla. Both were close; one went to overtime

The Lady Leopards prevailed 52-47 in OT.

The lead see-sawed throughout the game with first quarter ending at 8-8. The Lady Lions led 21-18 at the half and 30-28 at the end of the third.

They were up by a point with time running out in the fourth. De Queen’s Madison Runnels hit a free throw with :45 left in regulation to tie the score at 40-40.

Haworth’s India Morris hit a pair at the line with 30 seconds to go. At :15 Sydney Casteel passed to Jera Cotten for a basket plus a free throw that gave De Queen a 43-42 lead, but C. Randolph hit a foul shot at :10 to force overtime.

The turning point in the extra period came after each team had added a bucket. Belle Lindsay scored for a De Queen lead at 2:42. A Haworth miss turned into a fast break with Lindsey scoring again to make it 49-45.

Haworth’s next possession proved fruitless, and the Lady Leopards ran the clock down to :46 when Casteel was fouled and sank both attempts for a 51-45 lead.

D. McGough got the home team’s final points with :38 left. At :14 Cotten made a free throw for De Queen’s last score.

Morris had 15 points for Haworth. McGough had 14 and J. Randolph 13 before fouling out.

The Leopards withstood a late challenge to win the boys contest 71-68.

After De Queen led 18-16 at the close of the opening period, the Lions moved in front 34-33 by the half. The Leopards moved back in front by 54-52 to start the fourth quarter.

Haworth scored six of the first seven points of the fourth to regain the lead at 57-55. The Leopards’ lone point was a free throw by Nathan Patterson.

Haworth hit two threes in the final two minutes. The second by Brett Clark made it 71-68 with a second left. After a Lion timeout, Cooper Young made the Leopards’ last point with a free throw.

Dykes led all scorers with 30 points, including a pair of treys.

Canada's 'Atlantic bubble' has been a sanctuary. But it may be bursting soon

Canada's 'Atlantic bubble' has been a sanctuary. But it may be bursting soon

Beat the Bruins? Here are 5 keys to ending a pair of Arizona Wildcats losing streaks

Beat the Bruins? Here are 5 keys to ending a pair of Arizona Wildcats losing streaks

ICU nurse's take on 'How It Started ...' meme goes viral

ICU nurse's take on 'How It Started ...' meme goes viral