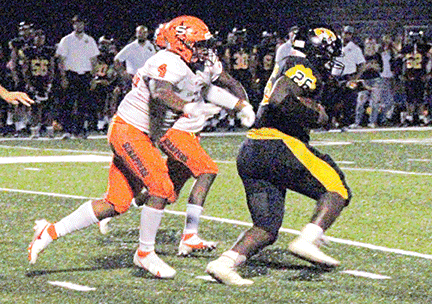 De Queen’s Donyea Whitmore sheds a pair of tacklers on a 36 yard run against Nashville. 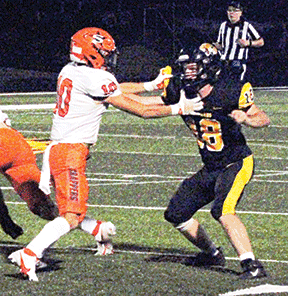 Leopard Luke Pearce fights off a Nashville blocker. Pearce had 14 tackles in the game.

In the first high school game in renovated Leopard Stadium, De Queen came close but could not get over the top. The Leopards lost to Nashville 41-27.

Most of the offense was in the first half. The visitors began at their own 40 yard line after receiving the opening kickoff. Four plays later Ethan Gunter threw to Peyton Hilliard in the end zone for a 35 yard touchdown with 10:50 remaining in the first quarter. Obed Aguilar kicked the extra point for a 7-0 lead.

Nashville’s onside kick failed, giving De Queen the ball at the DHS 45. Using the running of Donyea Whitmore, the Leopards gained two first downs, the second at the Nashville 33. Three plays later it was fourth and 15. Manny Hernandez reached over a defender to grab Dylan Williamson’s pass in the end zone for a TD. Jesus Marrufo kicked the PAT to tie the game at 7-7 with 7:54 left in the opening period.

The Scrappers began at their 29 following the kickoff. On second and six at the De Queen 44, Gunter again connected with Hilliard deep for a second touchdown. The PAT made it 14-7 with 6:45 still to play in the first.

This time the onside kick worked; Nashville covered the ball at the DHS then went to the ground game with Tre Hopkins carrying. Hopkins went in from the two with 5:30 left in the period. Aguilar made it 21-7.

Nashville’s ensuing onside kick backfired when Kaden Ahumada returned it from midfield to the NHS 29. Six carries and an offside penalty later, Whitmore went in from the five. Marrufo’s PAT cut the lead to 21-14 with 2:19 yet to be played in the first quarter.

The pace of scoring slowed in the second period. There was 9:18 left in the half when Isaiah Jones caught a pass from Gunter for a 46 yard touchdown followed by the extra point to put the Scrappers up 28-14.

Nashville threatened once more in the half, reaching the De Queen 23 before a fourth down overthrow to the end zone ended the drive with 1:43 before the break.

A fumbled snap cost the Leopards seven. On second down, Whitmore had his longest run of the game, a 36 yarder that reached the NHS 48. A pass interference penalty put the ball on the 33. Dylan Williamson threw to Jon Jon Bahena for a first down at the 19. A first down QB keeper lost four, but on second Williamson hit Ahumada on a post pattern for a touchdown. The PAT attempt was wide, leaving the score at 35-20 with :20 in the first half.

The second half was more about defense. Monroe Barnett intercepted a Nashville pass at midfield to set up De Queen’s lone scoring drive after intermission. It took nine plays before Whitmore crashed in from the five. Marrufo’s kick cut the gap to 35-26 with a minute to go in the third.

A Scrapper field goal attempt two minutes later was wide. Taking possession at their 20, the Leopards made a first down at the 32, but the drive stalled. With the game clock approaching four minutes to play, De Queen went for it on fourth and five and came up short.

With 1:11 to go, Gunter went in from the one. The PAT bounced off the right upright to leave Nashville up by 41-27.

A what-could-have-been type of day for Nebraska ends in 23-16 loss to No. 3 Oklahoma

By the numbers: How NAU managed to stun Arizona on Saturday night