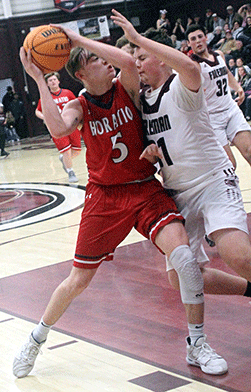 Horatio’s Logan Bevins collides with Foreman’s Will Smith under the Gator basket. 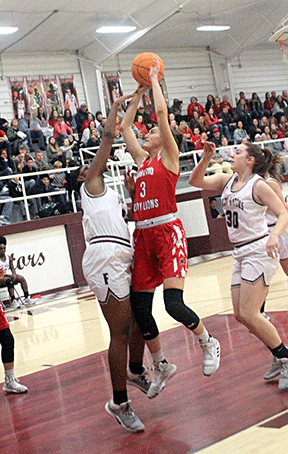 Summer Morgan of Horatio gets off a shot despite pressure from the Foreman defense.

Horatio won the senior boys game 61-59, but just barely. A three pointer with 10 seconds remaining saved the Lions who let a double digit lead evaporate in the fourth quarter.

With less than 20 seconds to play, the Gators had a 59-58 lead when they inbounded the ball on the Horatio end of the floor. Logan Bevins made a steal and attempted to get in layup territory, but the path was blocked. Bevins passed to Luke Bright whose eighth trey of the night put the Lions ahead.

After a time out, the Gators were able to get off a shot that was blocked by Bright. Kory Cunningham grabbed the loose ball and was fouled. He missed his free throw, but with only two seconds to go, the Gators could not get off another shot.

After trailing 16-13 at the end of the first quarter and 30-29 at the half, the Lions seemed to have  control of the game after a 21-9 scoring advantage in the third period. Bright hit three threes while Bevins, Wyatt Nelson and Blake Pickett put in  four points each.

Horatio led 50-39 to start the fourth, but the Gators scored the first 10 points of the period. Brantley Jackson put back rebound that cut the lead to 50-49 with 5:44 to go. Bright got the Lions’ first points of the fourth seconds later with a pair of free throws after a technical on Foreman

A basket by Bevins put Horatio up 58-51 with 3:o3 left in the game before the Gators went on an 8-0 run. Kohl Tucker scored with 1:04 left to put Foreman ahead for the first time since the early third quarter. The lead lasted 54 seconds before the winning shot.

The Lions had 14 fouls and made four of five free throws.

Tucker led the Gators with 18 points. Quincy Robinson had 15.

Foreman had a dozen fouls and made 15 of 20 attempts at the line.

The Horatio girls got a surprising challenge from the Lady Gators late in the game, but prevailed 41-33.

The Lady Lions were up 33-26 when McKayla Hartwick’s basket cut the lead to five with 5:12 in the game. Summer Morgan scored for Horatio.

After Princess Davis hit a free throw to get Foreman within 35-29, Teresa Chavez and Morgan had back to back buckets to get the lead up to 10 at 39-29.

Kenzie Cowan had nine points for Foreman and Hardwich seven.

The Lady Gators made nine of 17 foul shots and committed 16 infractions.

After rough 2019, Husker kicker Pickering has competition on his hands

Badgers in the XFL: Check out performances by former Wisconsin players in Week 3

Terminally ill patient marries his fiancée in the hospital

Terminally ill patient marries his fiancée in the hospital

Matt LaFleur: ‘There was never a doubt’ about keeping Mike Pettine as Packers’ defensive coordinator

Matt LaFleur: ‘There was never a doubt’ about keeping Mike Pettine as Packers’ defensive coordinator

Are you for or against passing a 1% sales and use tax in order to secure a new hospital in De Queen?